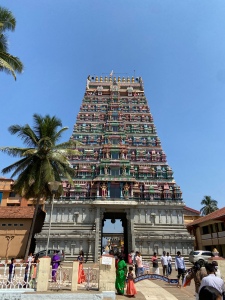 I have lived and worked in different parts of India – east, west, central, north and south. Although I belong to south of India, I am an Indian at heart and have learnt to respect all religions, caste, creeds and nationalities with my upbringing in family and society.

One thing which I hate is the fanatics in every religion. It cuts across religions and these people make ordinary men and women lose respect for religions. Who is a religious fanatic ? In my view, any person who uses religion to fulfil his or her selfish personal goals is a fanatic. Such people misuse religion for their personal benefit. No religion in the world promotes hatred towards another religion. But it is these fanatics who make people believe it and create discord in society.

I am a Hindu by religion and I am proud of it.(  as in the photo above).  Hinduism does guide us to respect all religions and beliefs. In my view, all religions lead us to the same destination. The path adopted may be slightly different but we reach at the same goal. It is like the skill of a soccer player. Some may dribble the ball while others may use their brute power but ultimately all players want to hit the goal post.

The religious fanatics create misunderstanding and disbelief amongst their followers about other religions. In order to prove that their religion is superior to other religions, they may end up creating hate and violence in society. Sane people in society should isolate such deviants in society and ensure that they do not succeed in their actions.

I personally believe that all human beings want to live peacefully and co exist with others in a harmonious way. Every society promotes peace until such fanatics spread their venom. We need to be guarding against such evil men and women in every part of the world.

Even in India, since Independence our Constitution guarantees a secular democratic republic. It encourages each of us to follow any religion of our choice and respect all others. However, there are fanatics even here who create a deliberate doubt in the minds of their followers towards other religions. We need to boycott such people and condemn their actions.

As a Hindu, I have always believed in the peaceful co existence of all religions. It is like the dress we wear. Every part of India, the dress and fashion is different. It is possibly guided by the weather conditions and peoples likes and dislikes. Nobody is forced to dress the way others do in some other state of India. The same is true for religion. We can follow what our heart says and without any fear.

If the fanatics come in our way, we need to crush their actions and ensure that they never succeed in any of their evil designs for society. We need to promote men and women who respect all religions and beliefs. We need to ensure that every citizen of the world has the freedom to chose what they want to pursue and the liberty to change if they so desire at any point of their life but on their own volition without coercion or force.

Let all religions coexist peacefully and lead us to the same goal.